Skip to content
HomeDo the right thing. It will gratify some people and astonish the rest. ~ Mark Twain 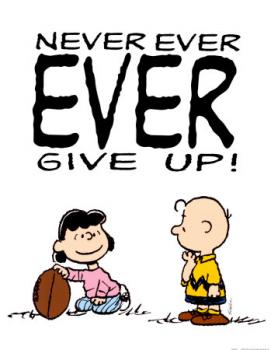 This weekend I took my nephews to see The Peanuts Movie. I can’t say that I’ve ever been a big fan of comics… I was most excited for the popcorn, and of course, to spend time with my nephews… and the popcorn!

I thoroughly enjoyed the movie. Such great messages. I was cheering for Charlie Brown throughout the movie but he’s Charlie Brown and so he fails at almost everything he does and has a considerable string of bad luck. And you would think that he would just give up. Give up trying to fly a kite, trying to kick the football, but he doesn’t. Surprisingly he is an optimist who believes that maybe this time it will work for him. Life isn’t easy for Charlie Brown but he doesn’t sit around feeling sorry for himself, well he does a little bit, but can you blame him? Most of the time he just keeps pushing forward.

3 thoughts on “Do the right thing. It will gratify some people and astonish the rest. ~ Mark Twain”

Inspiring others to live an EPIC life, one adventure at a time!